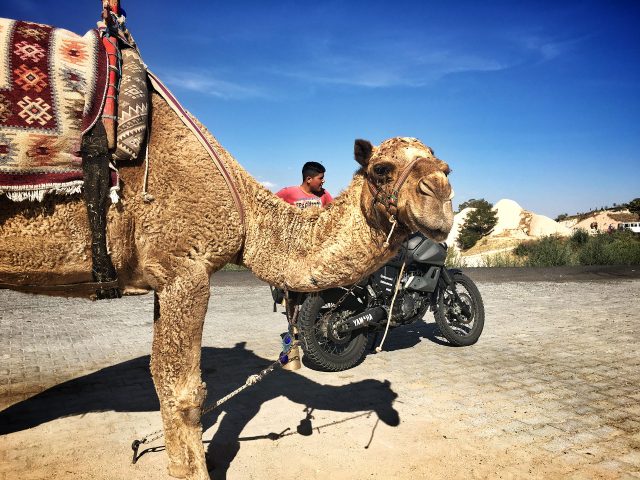 Leaving Dalaman on the coast of south west Turkey, I rode east along the coast for a while before heading north east towards Konya. From there I arrived 860Km later in Cappadocia. When I arrived things definitely took a few surprising twists.

As I arrive in a rural part of Cappadocia things feel basic, and I see remains of ancient cave houses carved into the basalt rock. I continued onto cobble roads that got narrower and narrower, twisting down a steep hill. It is not even wide enough to fit a large van down. The small, dry, and dusty valley that I arrive in is about 20m wide at the bottom. There is a track leading out of one end and a small row of old basic housing showing long term wear and tear. Apparently there is a hotel here on the map. I wander along and see a sign ‘reception’ pointing to a stone stair case through an archway. As I wonder up the stairs there are some grape vines acting as a canopy, and plenty of greenery that comes into view. Things start to feel nicer, I continue up three sets of stone stairs and the surroundings are beautiful. Lots of rooms above carved straight into the rock. 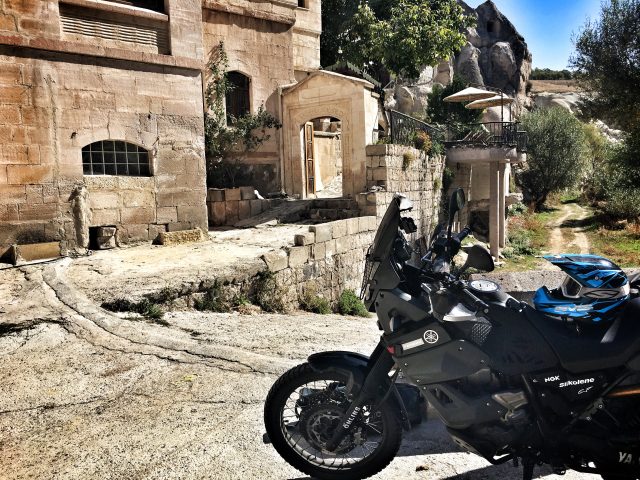 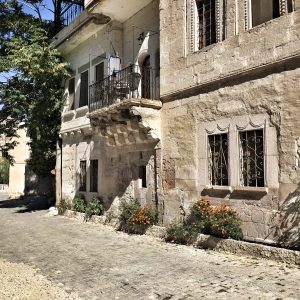 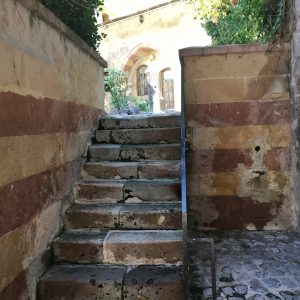 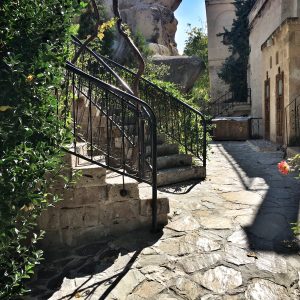 I enquire at reception if they have a room, I must be looking weary as the first thing the manager says is that I look tired. The manager then asks where I have come from, and as I start to explain the conversation naturally starts to flow. The manager stands up and says, “my gift to you, follow me”.
So I follow up more stone stairways to a wooden door and we walk into a reception area. I assume that we will be walking through here to get to the room and stroll into the middle of the reception area and the manager stops. “This is your room, the king Byzantine suite”. Well I nearly fell over, in total shock I could not stop saying thank you. I have to put some pictures in to show you the flow into this place. 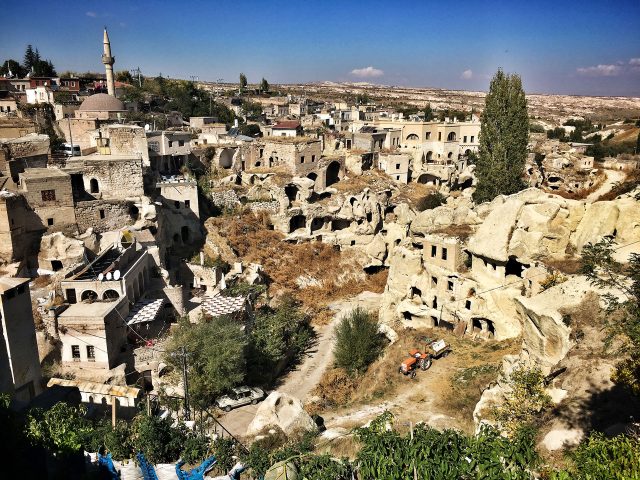 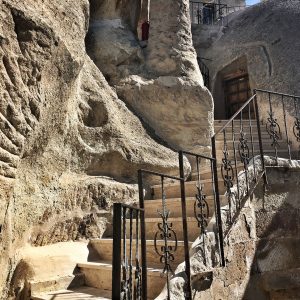 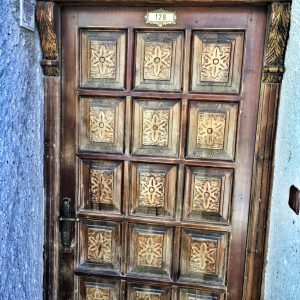 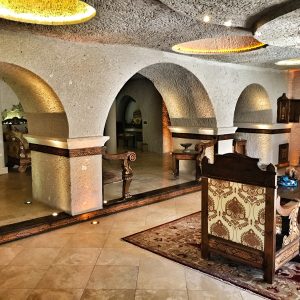 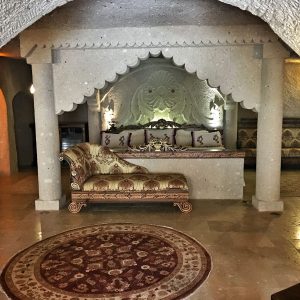 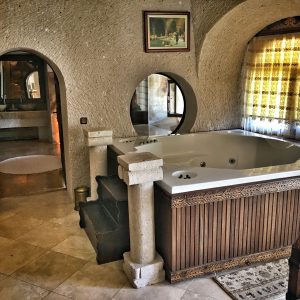 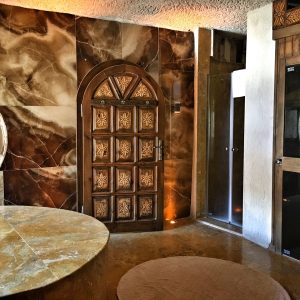 Where am I staying?

So this hotel was once a monastery and has been converted in such an incredible way. All the rooms are of the old monastery but have been re-carved into amazing modern rooms. This place is so out of this world and steeped in history. The room even has a tribute to the old stone door lock and hinge system. 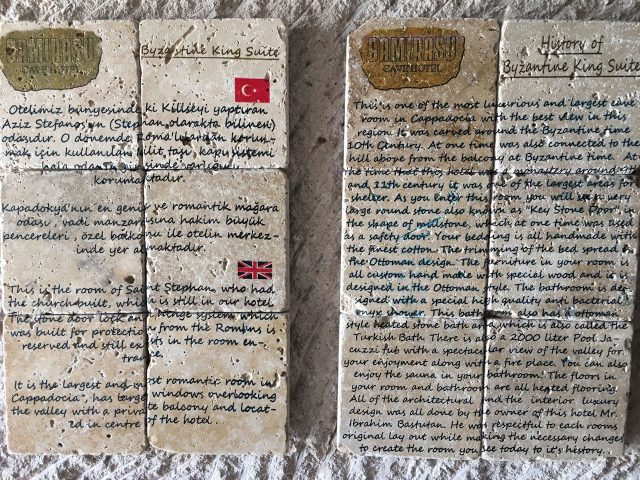 I decide to spend 2 days here to venture around, see the sights, ride some off road routes and make the most of it. Riding around Cappadocia Goreme seeing all the towers of rock from ancient volcanic activity is mind blowing. There are plenty of tracks and routes around these valleys so I make full use of being on an appropriate vehicle to explore this place. 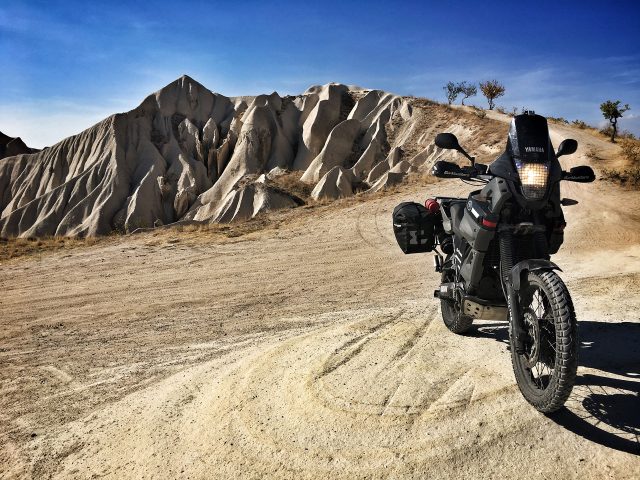 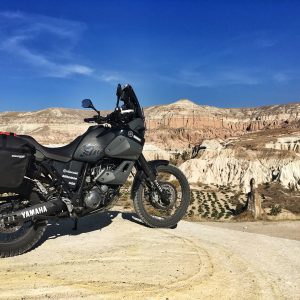 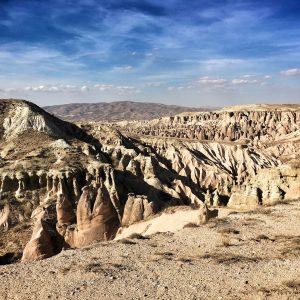 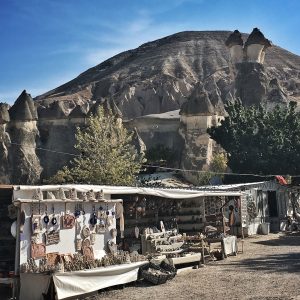 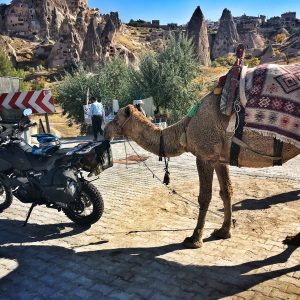 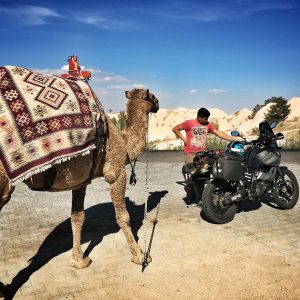 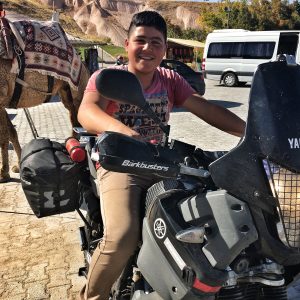 I finished my wandering around at a panoramic view point above a valley of the famous towers of rock to watch the sun set. Up from the valley wanders a hardened looking traveller, out of breath (quite rightly from the walk up). We start to talk about this and that, which was such a nice way to end the day. Now things take a slight twist after leaving this pleasant moment. Lazily I look at my navigation and I’m only 10Km away from the wonderful hotel. So I set the navigation to automatically take me there via it’s own calculated route, mistake number one. 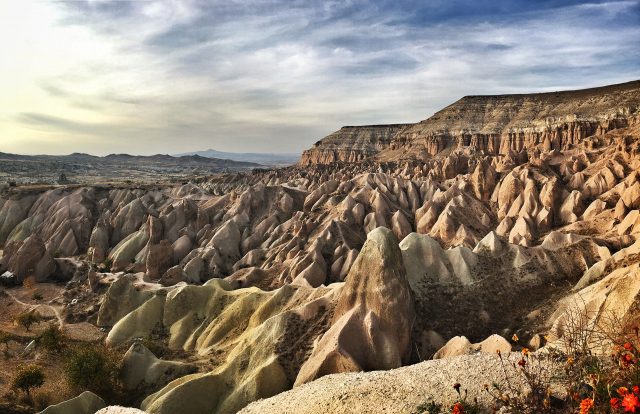 The navigation takes me off road and I’m enjoying the sand tracks sliding around and riding down into a valley. 6Km to go so I continue into the valley which becomes clear to be a river valley. Gradually getting towards the wetter sections I try to avoid crossing and going through the rivers by following a parallel foot path. Mistake number two. The foot path narrows to under a meter wide and goes up over a tree root ridge. The tree to my right locks me into the cliff face on my left. With just enough space to fit the bike through I send it up over the root, pull the clutch in to drop the front wheel and kill the power to see what is the other side. Mistake number 3. I should have checked on foot before committing myself to a ‘no return’ obstacle on my own. I now have no run-up space to drop off of a 75cm – 1m rock, which sounds fine, but on a 200Kg adventure bike with panniers on is a bit more challenging.

I have no choice but to ‘attempt’ to give it beans and pop the clutch. I barely lift the front wheel in the space that I had. I make the most clumsy, tank slappy, uncomfortable landing onto the front wheel. Weaving left then right and stop in/by the bushes. This meant that a tree branch smashed the windscreen and tore the right mirror off. The bushes managed to rip one of the straps on my Enduristan panniers. I rigged a temporary fix to sort out the panniers with a few cable ties, I pick up the pieces of my screen and and the mirror stuffing them into my back pack. I decide to carry on as I’m only 5km away now, mistake number 4.

The valley starts leading me into more rivers and now away from the general direction I need to be going in. With a flat battery on my phone and only one hour left to sun set, it is time to turn around and go back through all the rivers that I’ve just come through. This time not using any of the ‘clever footpaths’ to avoid the river beds. Feeling very hot, very sweaty, and slightly miffed, I get back to the road and head for the nearest garage to get both the bike and myself jet washed. The next day involved making some repairs, the hotel took my pannier from me and said ‘no problem, we will take care’. That same evening the pannier comes back to me with the strap sewn and riveted back on. The repairer took care not to puncture the inner waterproof layer too. It appears like the strap is now stronger than it was in its originally sewn state. There is something comforting about being in parts of the world where everyone seems to know how fix things well rather than buying new things.

It seems that in most towns in Turkey all of the repairs, auto shops, welders, etc are in one concentrated zone. I know three words in Turkish; hello, thank you, good bye. So with three words and sign language I ask at two mechanics for a thread tap to repair the mirror that was ripped out of the mount. I’m directed to a welder across the street. I wait a minute as one of the guys inside is at his prayer mat in the process of Muslim afternoon prayer. I’m welcomed into the workshop and in our best sign language I explain and the guys get to work. In about 20 mins we are sorted, a new thread tapped into the mount, the knackered thread on the mirror chopped off and a threaded stud welded on. Problem solved. 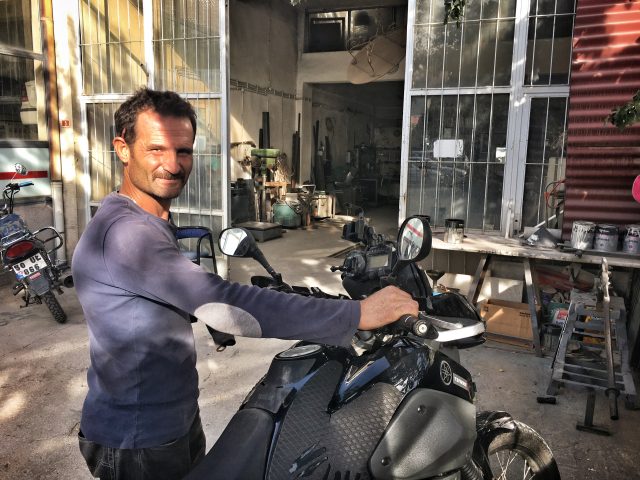 As soon as the mirror is back on the bike, we are on to sign language conversation again. Pointing at things and signing away. The shop is a father and son business, the father was the guy at the prayer mat when I arrived. He’s telling me about how he used to ride motorbikes too, showing me scars from stiches in his elbow. This prompts me to show him the armour I’m wearing, winning total approval from him. I ask how much for the repairs and they refuse to take any money. I insisted over and over to check that this wasn’t just a ‘taarof’ type of etiquette. They still refused to take payment, tapped their hearts, and gave me a drink. I go to my rucksack and distribute a few snickers bars.

Regardless of how people may look, what religion they are, where they are from. PEOPLE ARE THE SAME! Shown some respect and courtesy, without assuming or behaving to be better than others. And almost everyone is kind and caring. 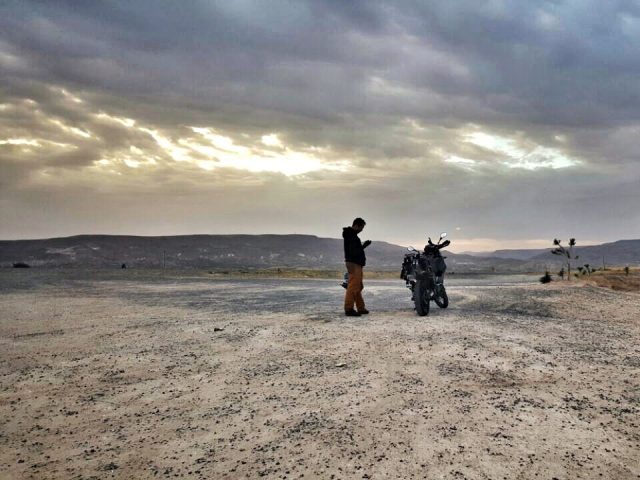 Remember the guys I met crossing the border into Turkey, well one of those lads just dispatched a new screen to me. Legend! That saved me a messy day with fiber tape and resin repairing the pieces of my old screen. So in one day that’s all the bits and pieces of maintenance sorted. Problem solved. 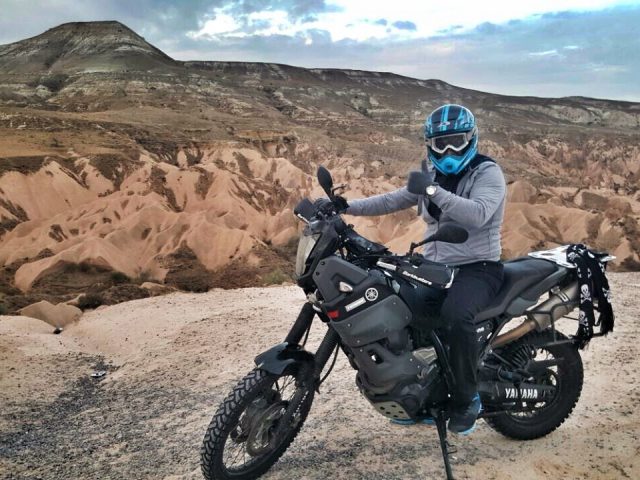 As I arrive back at the hotel, I meet a guy named Kasheef looking for the hotel in the same way that I was when I arrived. We start to talk and it turns out he runs a travel agency in Pakistan, it seems like signs are pointing my way to Pakistan (inshallah indeed). We have a few drinks, eat dinner and talk about various things for a pleasant evening. Kasheef is on backpacking trip around all of the destinations his agency provides, spending one day in each. A really interesting guy and I’m quite lucky to have met him. Happy travels Kasheef.

So it’s been an eventful two days, it’s now time to head to the Iranian border. Off we go again then brain. 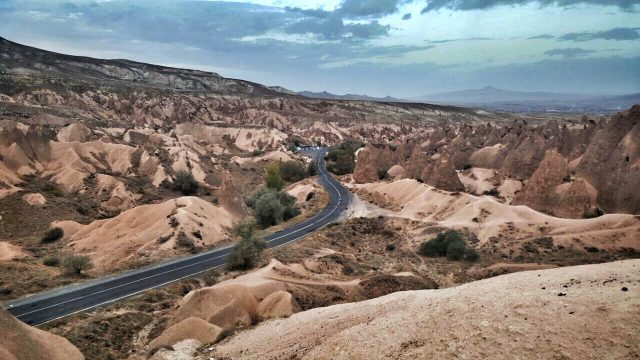 4 Responses to "Twists in Cappadocia"