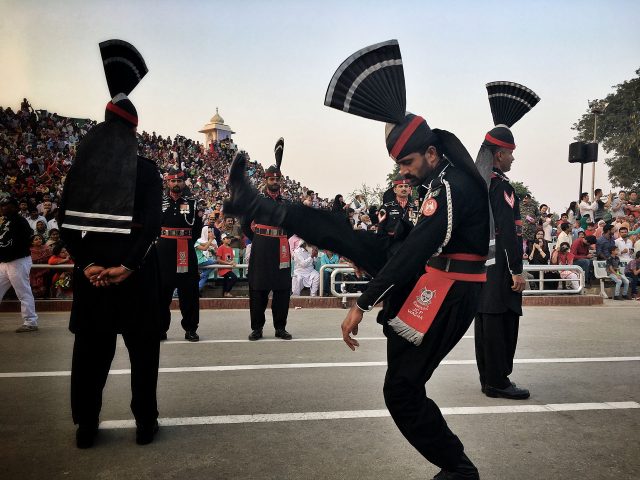 Visiting a few places around Lahore, close to the Indian border. The plan is to watch the beating retreat ceremony (border closing ceremony) at the Wagah/Attari Border, then cross the border on foot the following morning.


To start with I head to Badshahi Mosque which is similar in size and shape to the Taj Mahal. But is constructed of red sandstone and white marble and considerably less busy. The mosque is connected to Lahore Fort, and both are UNESCO world heritage sites. After a quick visit to these spots and a few photos, (and more photo requests again) it’s getting on for 15:00 so it’s time to head to the border. To watch the famous beating retreat border closing ceremony at the Wagah-Attari Border. 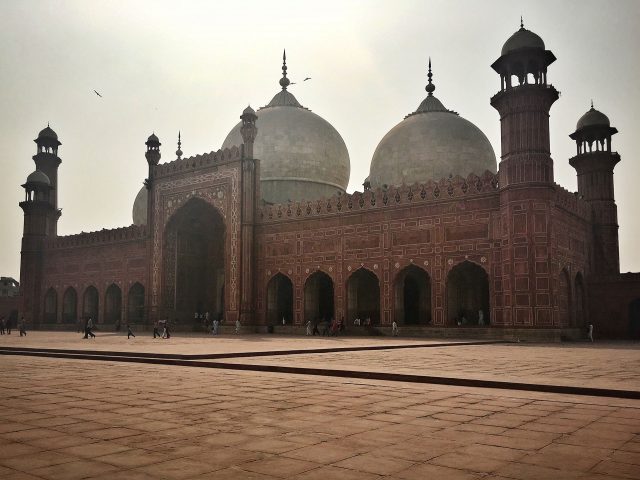 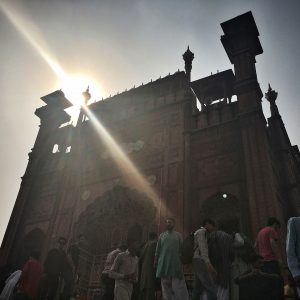 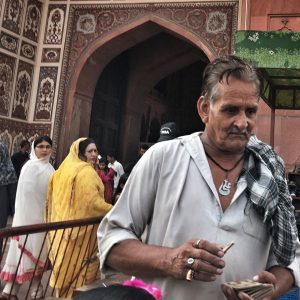 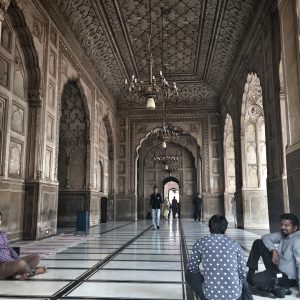 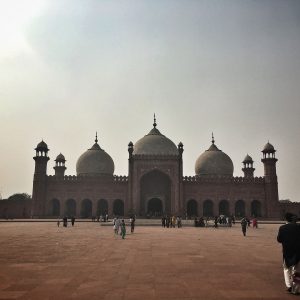 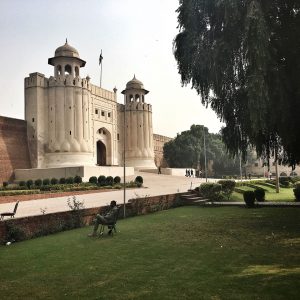 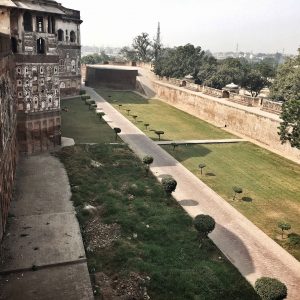 Watching this ceremony has been something I’ve wanted to see. But also a useful way to have a recce of the border before tomorrow morning’s crossing. As I arrive toward the border I go through about 6 check points. Where all my papers, bags, vehicle, and body are checked every time. Then at 1km away from the actual border I have to park up and continue on Foot. At this point the crowd of people heading to watch the ceremony is similar in size to that of a major sporting event. While at the ticketing booth, queuing is carried out in a new style that I’ve not experienced before. Personal space has a different meaning here, there is none. Well actually there is, the space inside of your own body is your personal space. So queuing here means that your chest is placed against the back of the person in front of you. And so it continues like sardines in a can down the line. If you leave space someone else will fill it. So press your body against the other person’s or get pushed out of the queue. I guess this is why there are separate lines for male and female. Once past the ticket booth and past security, things flowed along quite nicely.

Along with the usual stares at the mystical lost white rhino (and photo requests). Which I have to say in a crowd of thousands I felt like I had to manage myself and my responses carefully. Whenever one person would walk along side me to make conversation, ten others would join. Then when one asked for a photo, so did another ten. If I politely refused, it would usually be met with a gentle tug on the arm to bring me to a stop. Where a quick photo would then have to be taken. So keeping my wits about me felt like it needed high alert, but without appearing as anything but calm. Mainly so as not to not cause any offence in a mob of people. Which would be unlikely to escalate out of control in a place as heavily guarded as this. But I just didn’t fancy my pockets being picked, which would be such an easy thing to do in a situation like this. Maybe that’s unlikely too, and it’s nothing to do with the country I’m in, more to do with the fact that I would watch out for that anywhere that is as crowded as this. Anyhow, people were quite amused when I wanted to take a photo of them in return. So I started to use this as my diffusing response to the photo requests and stares. 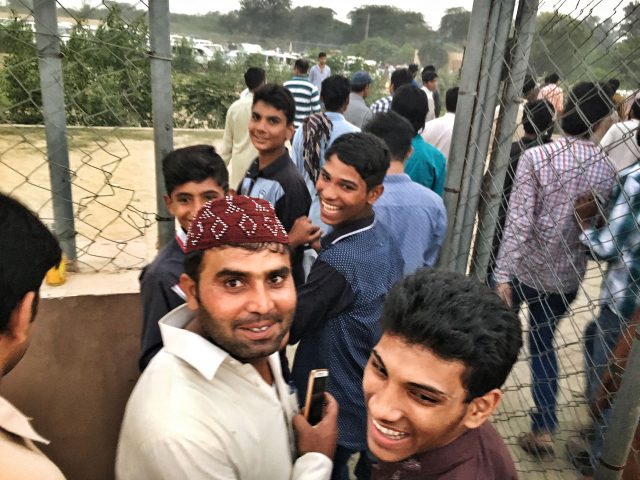 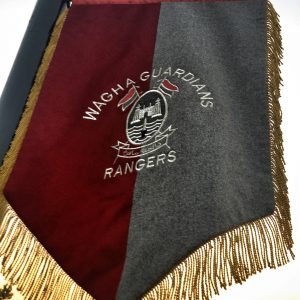 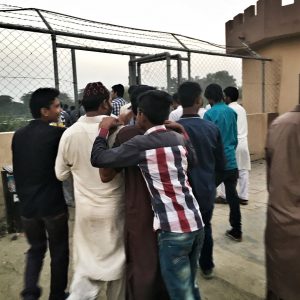 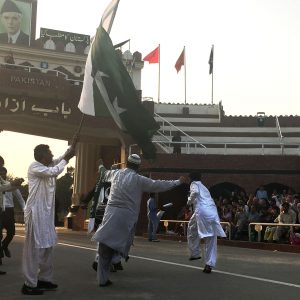 Once I arrive at the border gate where the ceremony is taking place. There are huge stands surrounding the area, like any sports ground. I am seated right at the front in a VIP area reserved for visiting foreign nationals. Where I am still the only westerner. I think the crowds are the same size over on the Indian side of the border gates. I would guess that there may be one or two more western tourists on that side of the gate though.
As various soldiers are preparing the area, some pass me with a second glance followed by a thumbs up. The crowds are starting to jeer and banter at each other, Pakistan versus India. 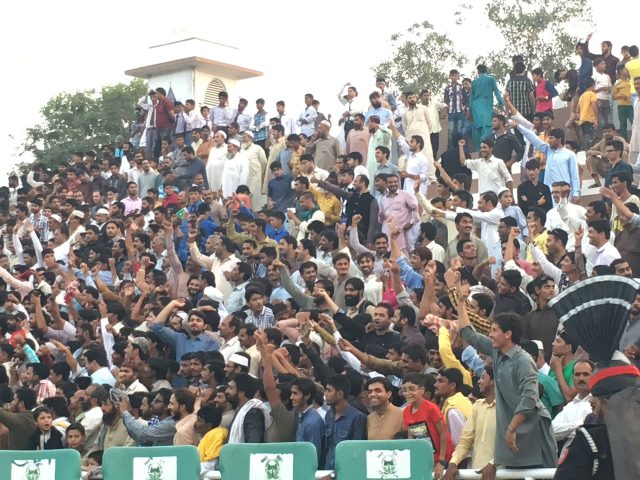 I can’t really describe well enough the following parade that takes place. I can say that the drill which this lot smash out is odd to say the least. But it is indeed spectacular. Their uniforms and the drill definitely has some touches of influence from British Military. But it seems to also have influence from Monty Python’s ministry of funny walks, and a some kind of Maori Haka. It’s mental! So I’ll let the photos do the talking. 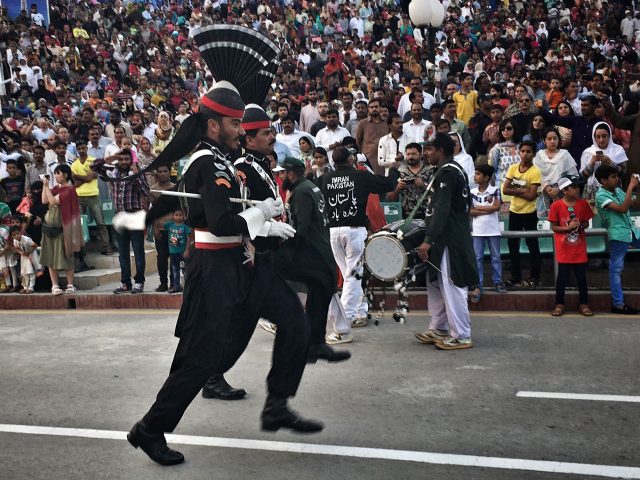 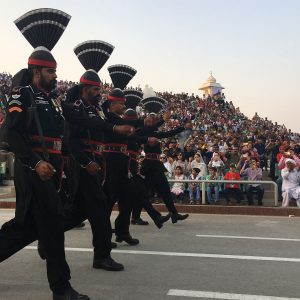 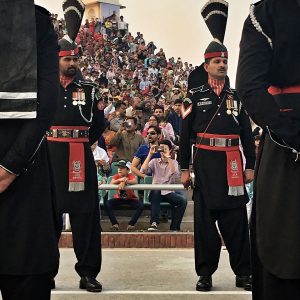 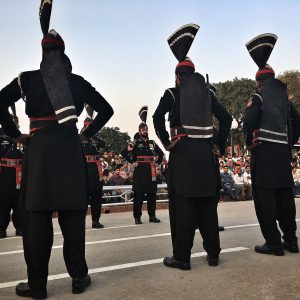 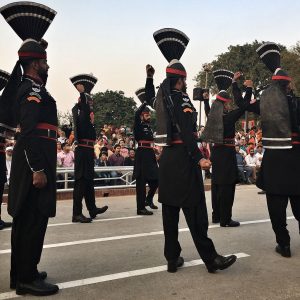 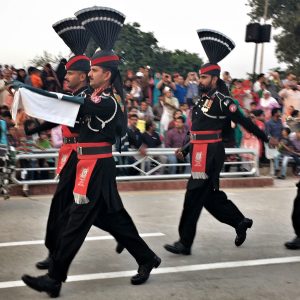 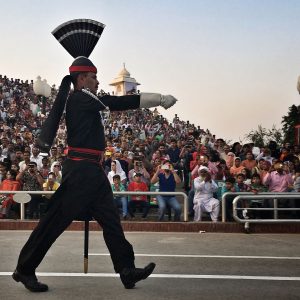 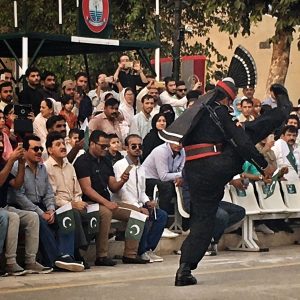 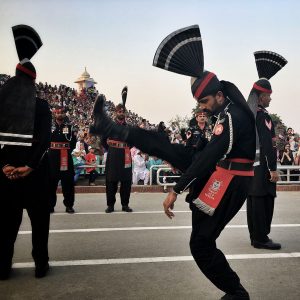 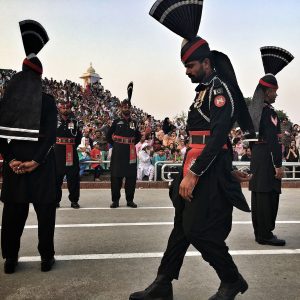 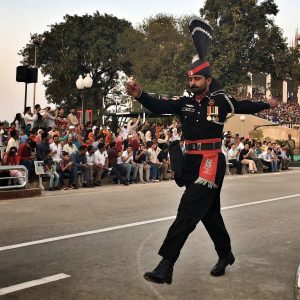 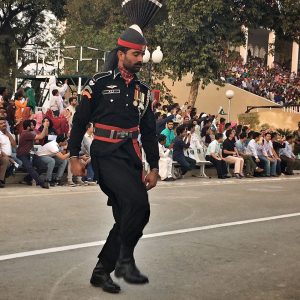 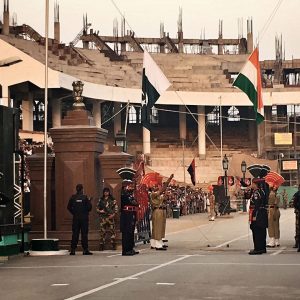 Crossing the Border on Foot

The Wagah border is the only border open to international citizens and its gates are open from 10:00 to 16:00. So to watch the closing ceremony meant I would be crossing the border the following day. Because I would rather have watched from the Pakistan side as currently it’s a rarer opportunity for me. Anyway having given the KLX back I cross the border on foot the following morning. The border crossing is quite straight forward and the procedures at each end are almost like airport customs and immigration departments. Really nothing to it compared with other borders I have been to recently. 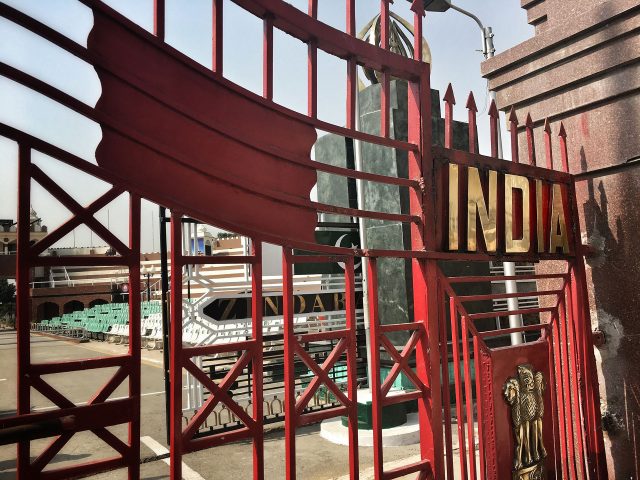 Once on the Indian side of the border the next challenge began. Which I didn’t think would be that much of a challenge. I had to get myself from Wagah/Attari to Delhi which is around 480 Km with the 100 USD in my pocket. There are obviously no ATM’s around until I get to Delhi. I thought that 100 USD would be plenty, however I turns out that India is really not that cheap. I’m sure I could head to the train station and wait for a slow overnight train to take me to Delhi. Which I’m sure would be fun too, but it kills off another day. Anyway I find a bunch of taxi drivers who ask for 10,000 rupees for the journey which is definitely a rip off and equates to about 130 USD. Anyway I explain to the group the amount I have, which I am hoping to get them bidding against each other. After the taxi drivers finish turning their noses up at the offer of 100 dollars to drive me to Delhi. The conclusion is that for 100 dollars one taxi driver is going to drive me 200Km at which point I will change to another taxi that will take me the rest of the way. I’m sceptical as to whether this is a scam or whether it will work out, so I keep my cash stashed and I’ll work it out as I go. 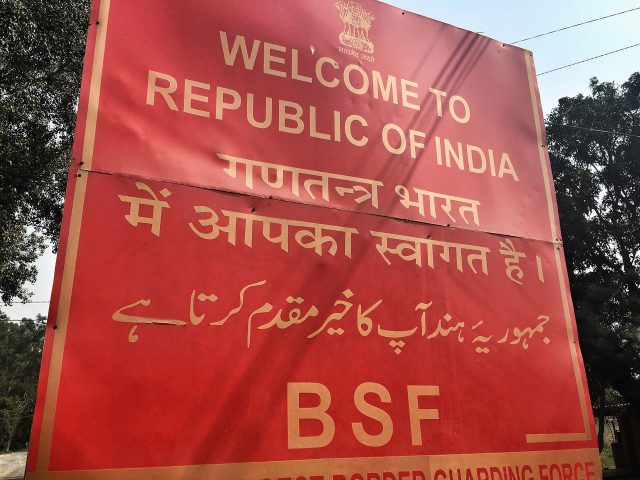 As we get to the vehicle I’m wondering if it will mechanically make it 200km never mind the human factor involved. Which as it turns out the human factor was kind of a liability too. The taxi driver is some kind of human cartoon, a character that was left out of the Whacky Races for being too much of a liability.

So let’s start with the car and I’ll get to the driving in a minute. There is a metal on metal noise banging away with the revolutions of the engine. Then there is the fact that the fans and other electrics seem to randomly stop working. Never mind we’ll keep the windows down. We have no mirrors, intermittent electrics, and a clanging engine. Being driven by a guy who wants to take me to a money changer before going anywhere. Well that’s not happening, I’ve been keeping a fairly stoic face the whole time which I change to stern the moment I think he’s starting to take the piss. Anyway he stops and sorts out the fuel himself, then proceeds to wait for his brother, who apparently we are collecting too. Rightyo man, rightyo!

Back on the road we are weaving in and out of seriously heavy traffic. Three lanes which apparently mean 5 lanes of vehicles then bikes ride around the edges. Next time I’m in a European traffic Jam, I will appreciate how ordered it is. People are undertaking, overtaking, passing down the hard shoulder, driving into the opposite carriageway into the three lanes (so five lanes of actual vehicles) of oncoming traffic. Welcome to Indian driving then! The horn seems to be the universal replacement for all other controls and communicative devices. The horn replaces the use of; indicators, lights, brakes, road markings, and sometimes steering to avoid others. Yes I am being serious, although later I find out by experience and comparison that this driver is just a lunatic. Even in comparison to other drivers that are willing to rear end other cars.

Anyway when the electrics in the car start to fail, so does the over used horn. So the cartoon driver does his best impression of a traffic whistle while pressing his lips together with his fingers. He starts mockingly waving traffic out of the way, as if he’s realised that his driving is mental so why not start mocking it.
We make it 200km and pull over by the next driver’s vehicle, which is much more solid in appearance, a little Suzuki van. The first driver asks me for the full 100 USD, and naturally I ask “what about money for the second driver”. The first driver gives the second driver a wedge of a few thousand rupees, so I hand over the 100USD and off we go into the second vehicle. No problem.

The second driver is calm and serene, and the little Suzuki van is solid compared to the previous vehicle. The second part of the journey is relaxing in comparison to the first. The driver is polite, friendly, we stop for some tea and a chat then carry on to Delhi.

The journey to Delhi went without a hitch, so the next task is to get back on two wheels and riding again. 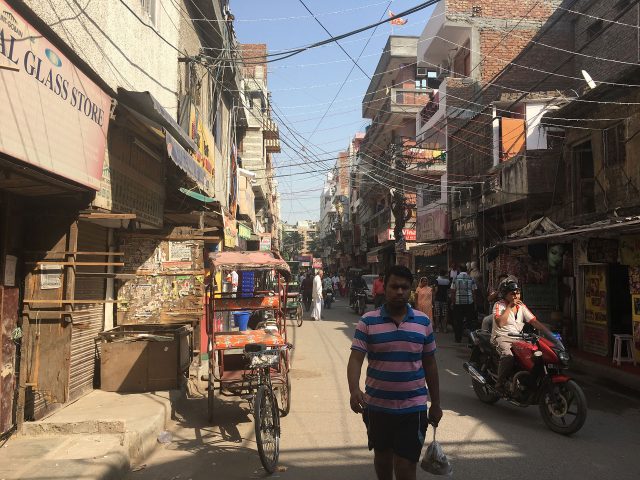