Faster than your super car for less than a grand!

The ZX9R was just a side project because the opportunity came up, and it seemed like a a good way to learn more.

The ZX9-R C1 is a brilliant bike that’s often overlooked, and because of the age is usually victim to a few problems. However, when its brought back to life, its such a fast bike and so much fun to ride.

So I got hold of one for £500 and set about bringing it back to life. The one I picked up had this crazy problem after starting up (and this was a learning curve). The cylinders would gradually flood, and the bike would cut out. The flooding was fairly drastic too, to the extent where cylinder 4 was almost filled with fuel and unable to move properly. Fuel even managed to make its way out of the air box via the vacuum system, pouring on the floor. Then there was plenty of fuel accumulating in the oil too.

Working out the issues

So after a little inspection the flooding was only on cylinder number 4, a little on number 3, and barely anything on 1 and 2. After testing the fuel pump with a pressure gauge it was definitely operating normally, it turned out to be the carburettor float needles. Which were worn and allowing fuel to continue being pumped even after the float bowls were full. So all needles were replaced, engine flushed, quality oil and filter replaced and that took care of that problem. Next a quick hook up to the carb sync tool and get them all running in time. I thought I May as well flush out the cooling system while I’m on the case.

As I’m on a roll, may as well strip the forks down, check the springs, change the seals, and replace the oil (Which looked more like metallic glop than it did oil!). Wow, that hadn’t been changed in a very long time.

Six pot calipers, or change them to four pot?

Next the 6 piston, twin brake calipers at the front have a reputation for being very spongy. There’s load of talk with various different takes on this, most of which conclude that its air in the system, or 6 pot calipers are just shit and get some 4 pots instead. No, and No!
These six pot brakes are awesome. Looking at the pistons in the calipers when the brakes were being applied, 3 pistons in each caliper set were stuck or moving slowly. So I started by replacing the hoses with some new venhill braided lines. Then rebuilt the master cylinder with a new spring and seals.

I ordered a new quality seal set from power house, and stripped the calipers down into their halves, removed the pistons, and all the old seals. Wow, there was a LOT of corrosion in the seal seats! I Cleaned everything up with a dremel and an abrasive brush. Then I cleaned and polished each of the pistons with the dremel and some polishing compound. Once everything was pristine and mirror finish clean, I took some red grease to coat the seal seats and refit the caliper body with the new seals. Carefully replacing the pistons into their seats, I rebuilt the caliper halves. Now the system has new pads fitted, the system re-filled and properly bled (which took ten mins. These brakes are now absolutely SOLID!!! They are just awesome brakes. (and this bike needs good stopping power). 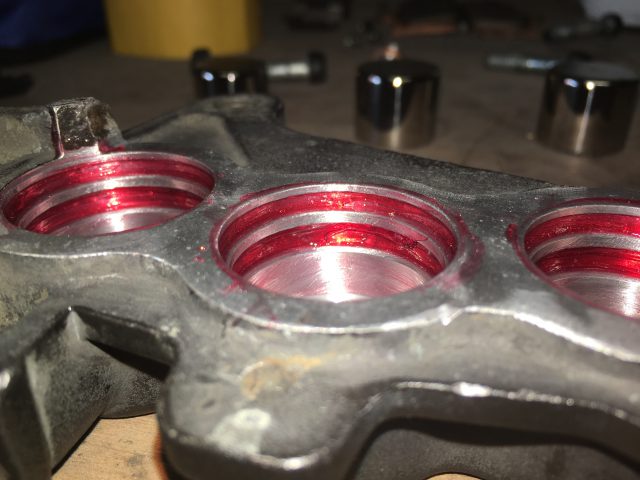 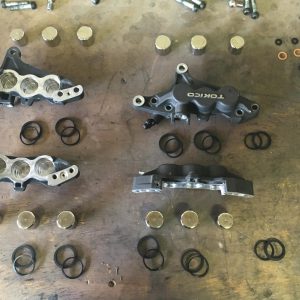 Next on to some simple stuff. Adjusting the throttle cable slack so that it snaps shut properly. Stripped out a bunch of crazy wiring in the lighting system from the previous owner and installed LED lighting instead.

Now she’s running perfectly again with a new set of rubber on, she’s bloody fast and great fun to ride (all for less than a grand). Well chuffed!!

One Response to "Faster than your super car for less than a grand!"